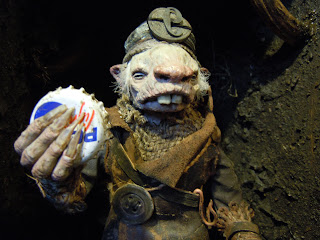 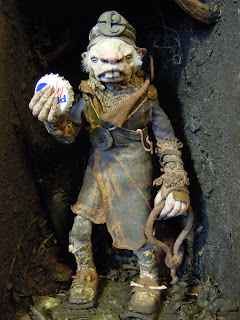 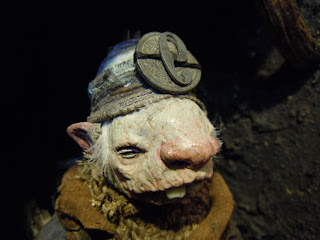 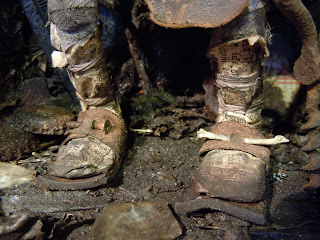 The Common Swedish Mole-Gnome is most often found on the island of Gotland in southern Sweden, where the islanders commonly know them as "Di sma undir jordi" or "the little ones under the earth" In difference to the House gnome, the Mole-gnome shun all humans and live in complex underground tunnels. Carl Linnaeus notes in his "Om Svearikes oknytt och småfolk" that a ancient rivalry exists between the two types of gnome. 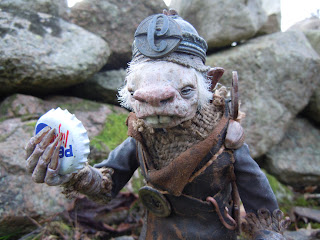 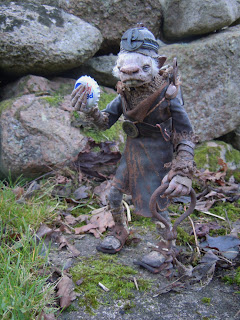 This was little guy was fun to do, I thought it was about time to try and make something that wasn't mummified or dead in any other form.
I used what material i had at hand. the flesh parts where sculpted in i Super Sculpey and painted with several thin layers of paint.
Nails and teeth where where made of plastic and the clothing was made from some leather scraps and an old sock. His boots partly consist of paper from an old prayer book. and is cap is an old brass lamp fitting. He was mounted in a glassed box but it proved impossible to get a good photo of it with reflections and bad lightning.
He was given as a Christmas present and from what i heard he was appreciated.