Music videos often have close to no budget and crazy deadlines, at least from my experience.
Me and skilled prop student Erik had about a week to make a complete daemon character plus some gore effects and props, this was for a music video for the band Dying Fetus.

I'm posting the process to show that you don't always need expensive materials and experience to make cool stuff. There is two quite obvious references for this character-  The reference i got from the director was the Mouth of Sauron from LoTR and my own reference, the ever so inspiring Guillermo del Toro.

The head and neck pieces are basically cut and sanded polystyrene on a cardboard base, twigs stuck on and everything wrapped with masking tape and then covered with a couple layers of tissue paper and a mix of PVA glue, cheap wood filler, paint and water. 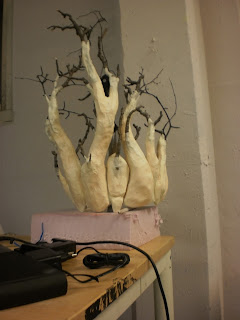 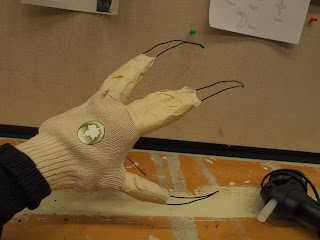 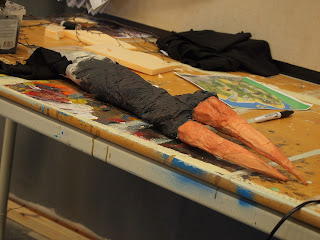 We tried to keep the fabric in the joints, but this would be filmed in a dark room so small breaks wouldn't be a big problem. it was painted with acrylics and some extra varnish between the "scales" to make it look a bit more organic. 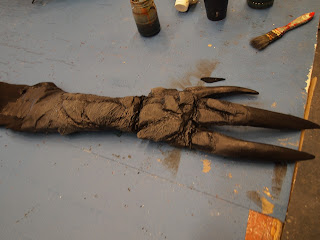 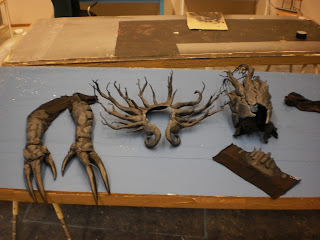 The rest of the costume was basically a black shroud, the scales was cut from an old doormat i found in a ditch (!)  and a bunch of black garbage bags, strips from the bags was twisted and half melted with a heatgun into the stringy bits. 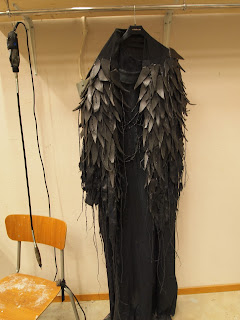 After doing a bit of simple makeup and some 40- minutes Super Sculpey teeth (probably not very healthy but I was the one going to wear it anyway) it was done. and ready for test shoot. 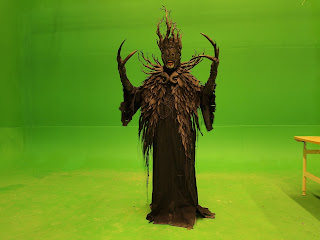 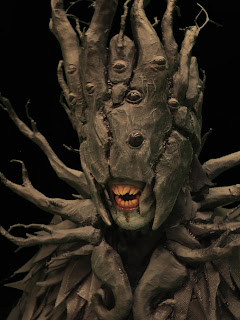